H. P. Lovecraft, Cosmic Horror, and its influence on cinema

The popularization of H. P. Lovecraft and Cosmic horror has been sweeping horror media over the last decade.  From the 90s through 00s it had almost completely disappeared from horror movies, but was taking over comics and books, keeping it alive. Even still, masters of horror like John Carpenter, Clive Barker, and David Cronenberg were keeping the genre with their creature features and body horror which were deeply influenced by H. P. Lovecraft.  Indeed, Carpenters Lovecraftian influences can be see in many of his movies such as my second all time favorite The Thing (1982) which seemed a lot more like At The Mountains of Madness than Who Goes There?, the book it was based on.

The 2010’s have seen a sudden uptick, not just in cinema, but even in comics and books which, at one point, seemed to be Lovecraft last bastion. Cosmic Horror fandom has been taking over horror and sci-fi conventions alike, nowadays seeming to be almost as popular as Zombie Survival Horror.  Indeed, even I got swept up as a writer in the craze, all three of my cosmic horror novellas getting picked up for publication for three consecutive years in a row. In the Shadow of the Mountain (2019), In The Beginning (2020), and Parabiosys (2021).

With the 2020 release of Color Out Of Space, featuring Nicolas Cage, this trend shows no sign of slowing.  For me, it’s a good time to be a cosmic horror writer.  For fandom, it’s just a great time to be live.

In the coming weeks, NightmareFeed will explore the Lovecraftian genre of Cosmic Horror.  We’ll take a look at some of the works of H. P. Lovecraft, how they’ve influenced the media, fandom, and even us here at Nightmare Feed.  We’ll look at Color Out Of Space (2020), and the tumultuous horror career of Nicolis Cage.  I’ll also be dropping a review of Color Out Of Space (2020), as well as recommending dozens more Lovecraftian movies, starting with my Top 5 Lovecraft Inspired Movie List.

Score: Inspired by H. R. Giger, who did 2 Necronomicons. 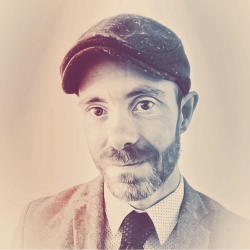 Find me at
Joseph Kernozek
Editor in Chief at NightmareFeed
(He/Him) I previously ran a small publishing company, ARTPOST magazine, that published a wide range of fiction from horror to mystery to the whimsical and everything in between as well as artwork, photography and poetry.I’ve run several review websites including DailyReview.I am also Twitch affiliate under the name ko_zenker and stream retro classics from the golden age of video games.

My first brush with the horror genre was through literature and started with R.L, Stine’s Fear Street series and then progressed to Bram Stoker’s Dracula and the novel that introduced me to my new love…Stephen King’s Cujo.After that it was all Stephen King, all the time for the next few years for me.My favorite novel of his being Needful Things with Misery being a close second.When it comes to horror films my first real experience with the genre was when, as a kid, I found a VHS tape in our house simply labeled “Psycho Cop” which I watched and then re-watched dozens of times.Only a few years later, after watching more horror, did I realize this movie wasn’t the defining standard of the genre and was, actually, not well regarded at all.Since then my tastes have evolved and below you will find the list of top five horror movies.

This list was very tricky for me to put together and when doing so I actually composed a list of my top 50 horror movies to make sure I was considering all possibilities.I suspect that if you asked me last week or next week this list may look different with the exception of Dracula, this will always be my number one.

Listen To Us Here:

You may have missed